In the summer of 1996, a group of 6 families from the Lone Tree and Castle Rock Montessori school communities came together with a goal to develop a charter Montessori elementary school. Soon they were joined by dozens of other families with a similar interest and, after months of tireless efforts, they received a charter from the Douglas County School District in March of 1997. In this same year, the MEF obtained non-profit status and the school began educating our children in a temporary modular building.

A few years later, MEF parent volunteers secured a 7,000,000 bond to finance the permanent elementary school facility. The current facility opened in the fall of 2000.

Contributions to our non-profit entity are tax deductible and are used solely for the benefit of DCS Montessori School at the direction of the DCS Administration and the DCS Board of Directors.

To view our IRS Form 990 for the last several years, please CLICK HERE to visit the Foundation Center and enter 841418418 (no dashes) in the EIN search field. 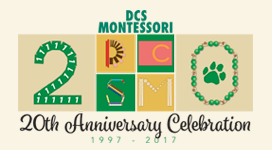 We are celebrating our 20th year as a school this year! Here are some of the highlights from the past 20 years.